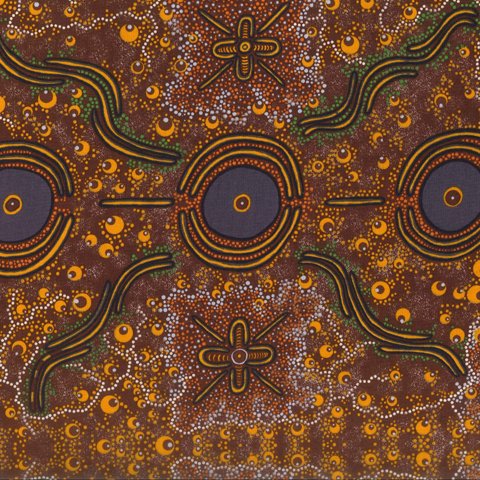 Story: Born in 1967 in Alice Springs, Trephina grew up with many uncles, aunties and cousins doting on her as a beautiful young Aboriginal girl. She was the only child in her family. Trephina learned to pant at a very young age by sitting and watching uncles, aunties and friends paint. She would then pick up a stick and draw her art in the dirt, with her Mother and Aunty being a big influence in her life.

Trephina went to English speaking school at Alice Springs. Even though English became Trephina’s first language, she was taught Luritja, the language of her family and elders at home. Trephina is a well-known artist and many of her artworks are in private collections. Her works are colourful and detailed. In ‘Dreamtime Knowledge’ she neatly drew numerous things which the forefathers created for future generations. She drew women sitting around waterholes with digging sticks.

“Dreamtime” or “Dreaming” has never been a direct translation of an Aboriginal word. The English language does not have an equivalent to express the complex Aboriginal Spiritual concepts to white people. The Dreaming or ‘The Dreamtime’ indicates a psychic state during which contact is made with the ancestral spirits of that special beginning.  Trephine, in this artwork depicted how the knowledge has been passed on from generations ancestors and forefathers, making the young generations knowledgeable and aware of Aboriginal Culture.