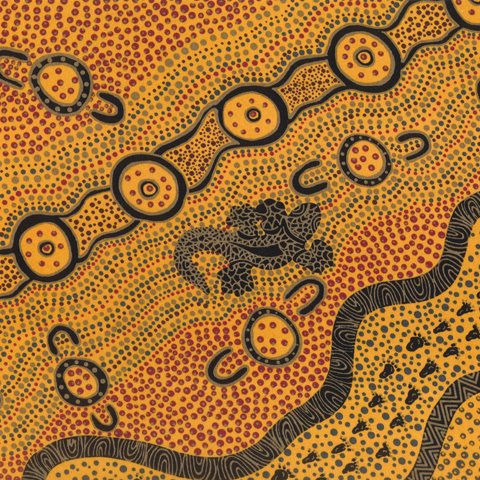 Goannas live in most of parts Australia, except Tasmania. There are 25 species of Goanna’s found in Australia. Goannas feature largely in Indigenous mythology. Goannas are predatory as well as scavenging in behaviour, and are dark in colour. A Goanna may prey upon any animal it can catch and eat. In the artwork, Heather portrays how the Goanna is hunting for its food in the Aboriginal Habitat. You can see women (semi-circle representation) are sitting near the waterholes and people are walking along a path in the bush.

Goannas usually lay eggs in a nest or burrow and some lay their eggs in termite mounds. They do not regrow lost limbs or tails. Goannas are culturally important to the indigenous people. They feature prominently in many dreamtime stories and artworks, and are also identified as a food source. They feature in symbolic spiritual motifs. Heather Kennedy is a well-known Aboriginal artist from Victoria. Her works are featured in many shows and her artworks is neat, bold and detailed.